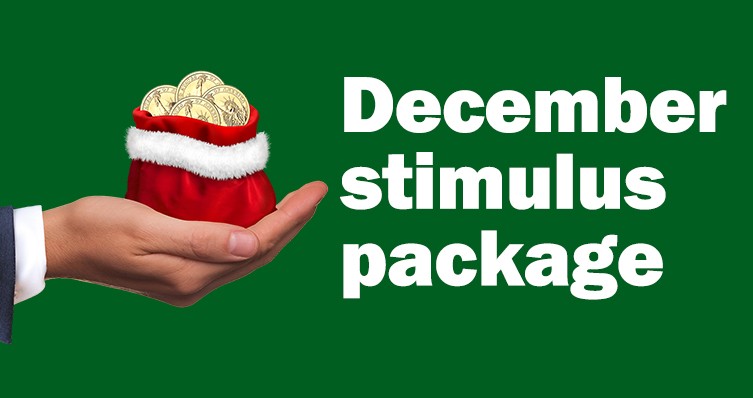 A new round of pandemic relief is coming soon as a result of a massive spending bill passed by the U.S. House and Senate on Monday, Dec. 21. President Donald Trump signed the bill into law on Sunday, Dec. 27.

The 5,593-page bill includes $2.3 trillion of total spending, with the majority ($1.4 trillion) as an all-encompassing budget package for the remainder of the federal fiscal year. The remaining $900 billion is designated for a variety of measures designed to help business owners and individuals affected by the COVID-19 pandemic.

Here’s a closer look at key elements of the spending bill:

Paycheck Protection Program tax fix: The IRS had previously said that expenses paid with PPP loans that were forgiven were not deductible, in essence making the loans taxable. The bill states that no tax deduction is to be denied or reduced by reason of the loan forgiveness being excluded from gross income. It will be effective for taxable years ending after the date of enactment of the CARES Act (March 27, 2020).

Paycheck Protection Program: The bill expands the PPP program to allow some businesses to receive an additional loan, called a “PPP second draw” loan. This round will be designated for smaller businesses with 300 or fewer employees that used or will use the full amount of their first PPP loan. They must demonstrate at least a 25% reduction in gross receipts in the first, second, or third quarter of 2020 as compared to the same quarter a year earlier. The maximum loan amount is $2 million, and the 60/40 cost split between payroll and non-payroll costs will continue to apply for forgiveness purposes. Second-draw loans are not taxable, and a simplified forgiveness application is expected to be just a single page for loans up to $150,000.

Extension of deferred payroll taxes: Under terms of a previous directive, deferral of payroll taxes would be allowed through Dec. 31, 2020, with penalties on deferred unpaid tax liability to begin on May 1, 2021. This bill extends the repayment period through Dec. 31, 2021, with penalties and interest on deferred unpaid tax liability to start on Jan. 1, 2022.

Employee Retention Tax Credit: Under the CARES Act of early 2020, this credit applied only to wages paid after March 12, 2020, and before Jan. 1, 2021. Now, the wage period will be extended through July 1, 2021, and it can be used in conjunction with PPP money for wages not paid for with forgiven PPP money. Additionally, the $10,000-per-employee limit that had been the aggregate for all quarters is now the limit per quarter. It also increases the eligible wages to 70% from 50%.

Unemployment provisions: Benefits created under the previous Pandemic Unemployment Assistance Act are extended through March 14, 2021. The bill also extends the federal unemployment benefits, but at half the former rate (now $300 per week).

Individual stimulus checks: The Treasury will issue stimulus checks of $600 to individuals who earn up to $75,000 annually; $1,200 for married couples filing jointly that earn up to $150,000 annually; and $600 additional payments per dependent child under the age of 17. Check totals will decrease incrementally for taxpayers who pay more than that amount and will phase out completely for individuals who earn $87,000 (or $174,000 as a married couple that files jointly). Checks will be considered non-taxable income and will not affect your 2020 return.

Earned Income Tax Credit and Child Tax Credit changes: Families are now allowed to receive EITC and CTC based on their 2019 income. That’s welcome relief for families whose incomes dropped as a result of the pandemic.

What’s not included: State and local funding that was included in original drafts of the bill has been removed, although Congress did extend the deadline for local and state governments to use money previously approved in the CARES Act. That deadline originally was Dec. 31, 2020, but has been extended by 12 months. Also not included in the new bill is an extension of federal student loan forbearance provisions, which are set to expire Jan. 31, 2021. Liability protections for corporations resulting from pandemic-related issues had also been part of original discussions but were not included in the final bill.

Just like the previous CARES Act and PPP legislation, this new round of stimulus spending includes a long list of changes and opportunities for small businesses and individuals. If you have questions, reach out to your KraftCPAs advisor, and watch for more updates as the bill’s details become more clear.

(Updated Dec. 28 to show that the legislation was signed into law.)