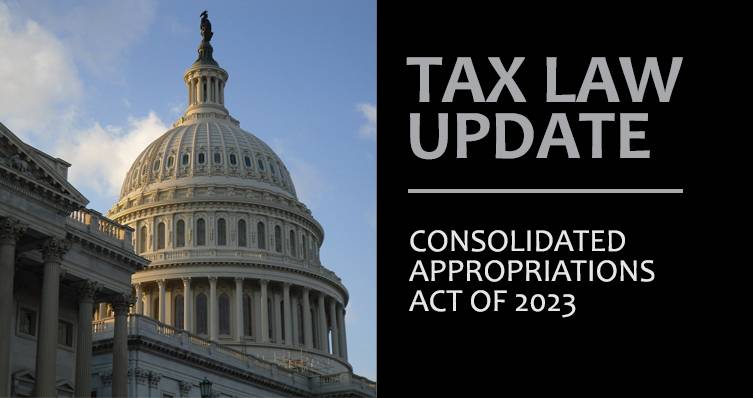 The Consolidated Appropriations Act of 2023 passed recently by Congress is a sprawling year-end spending package that includes two important new laws that could affect your financial planning: the Setting Every Community Up for Retirement Enhancement 2.0 Act (also known as SECURE 2.0) and the Conservation Easement Program Integrity Act.

Here’s a closer look at what to expect.

The original SECURE Act, enacted in 2019, was a significant bipartisan law related to retirement savings. In the spring of 2022, with an eye toward building on the reforms in that law, the U.S. House of Representatives passed the Securing a Strong Retirement Act. Despite strong bipartisan support, the bill stalled. Then, the U.S. Senate introduced its own retirement legislation, dubbed the Enhancing American Retirement Now Act.

SECURE 2.0 incorporates provisions from both bills and addresses a wide array of areas that make major changes to retirement planning, including:

Required minimum distributions (RMDs). The first SECURE Act generally raised the age at which you must begin to take RMDs — and pay taxes on them — from traditional IRAs and other qualified plans, from 70½ to 72. The new law increases the age to 73, starting January 1, 2023, and boosts it to 75 on January 1, 2033. This change allows people to delay taking RMDs and paying tax on them.

The law also relaxes the penalties for failing to take full RMDs, reducing the 50% excise (or penalty) tax to 25%. If the failure is corrected in a “timely” manner, the penalty would drop to 10%.

Qualified charitable distributions (QCDs). QCDs have gained in popularity as a way to satisfy RMD requirements while also fulfilling philanthropic goals. With a QCD, you can distribute up to $100,000 per year directly to a 501(c)(3) charity after age 70½. You can’t claim a charitable deduction, but the distribution is removed from taxable income.

Under the new law, you also can make a one-time QCD transfer of up to $50,000 through a charitable gift annuity or charitable remainder trust (as opposed to directly to the charity). The law also indexes for inflation the annual IRA charitable distribution limit of $100,000.

Automatic enrollment. Beginning in 2025, new 401(k) plans must automatically enroll participants when they become eligible. However, the employees may opt out. The initial contribution amount is at least 3% but no more than 10%. Then, the amount is automatically increased every year until it reaches at least 10% but no more than 15%. Existing plans are exempt, and the law provides exceptions for small and new businesses.

Annuities. Annuities can help reduce retirees’ risk of depleting their savings before they die. But RMD regulations have interfered with the availability of annuities in qualified plans and IRAs. For example, the regulations prohibit annuities with guaranteed annual increases of only 1% to 2%, return of premium death benefits and period-certain guarantees. SECURE 2.0 removes these RMD barriers to annuities.

The law also makes qualified longevity annuity contracts (QLACs) — inexpensive deferred annuities that don’t begin payment until the end of the individual’s life expectancy — more appealing. Among other things, it repeals the 25% cap on the maximum annuity purchase and allows up to $200,000 (indexed for inflation) from an account balance to be used to purchase a QLAC.

Part-time employee eligibility. SECURE 2.0 lowers the hurdles for long-term, part-time employees to participate in 401(k) plans. They’ll still need to work at least 500 hours before becoming eligible, but they’ll have to work for only two consecutive years rather than the three years required by the first SECURE Act. The provision takes effect for plan years beginning January 1, 2025.

Small business tax credits. To incentivize small businesses to establish retirement plans, SECURE 2.0 creates or enhances some tax credits. For example, it increases the startup credit from 50% to 100% of administrative costs for employers with up to 50 employees. An additional credit is available for some non-defined benefit plans, based on a percentage of the amount the employer contributes, up to $1,000 per employee.

Tax-free rollovers from 529 plans to Roth IRAs. The new law permits a beneficiary of a 529 college savings account to make direct rollovers from a 529 account in his or her name to a Roth IRA without tax or penalty. This provides an option for 529 accounts that have a balance remaining after the beneficiary’s education is complete. The 529 account must have been open for more than 15 years and other rules apply. The provision is effective for distributions beginning in 2024.

Cracking down on certain tax shelters

The retirement provisions in the omnibus law are partially offset by the law addressing conservation easements. Current law generally allows taxpayers to claim a charitable deduction for qualified donations of real property to charity. According to the IRS, though, promoters have twisted the relevant tax provision to develop abusive “syndicated” conservation easements that use inflated appraisals and partnership arrangements to reap “grossly inflated” deductions.

These are only some of the provisions in the new law. The entire omnibus law is sure to generate additional questions and guidance. Reach out to your KraftCPAs advisor if you have more questions about how these changes will affect you.